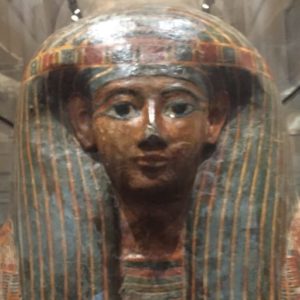 Head of Butehamun from his coffin, C 2236/2, in the Egyptian Museum, Turin, Photo: George Wood

The plundering of the Valley of the Kings wasn’t just done by bands of tomb robbers. Most of the emptying of the royal tombs was in fact carried out officially by workers of the Necropolis, under orders from the High Priests of Amun.

The project was led from the beginning by Butehamun, one of the most famous scribes involved in the building of the royal tombs of the Valley of the Kings, and a member of the most illustrious family of scribes there.

The start of the project coincided with the “Wḥm-Mswt”, the period of rebirth, which seems to have begun during the 19th year of Ramses XI. The nature of the period is unclear but it appears to mark the waning of power of the central monarchy, and the growth in power of the High Priests of Amun in Thebes. It may have begin when General Piankh, having driven a rebellious viceroy back into Nubia, took power as High Priest. Documents around Thebes were dated in years of the Wḥm-Mswt, rather than the regnal years of Ramses XI. After the death of Piankh, Herihor took over as High Priest of Amun and, after the death of Ramses XI, assumed royal titles. In the north, Smendes succeeded Ramses XI as king, initiating the 21st Dynasty.

The Wḥm-Mswt period lasted at least 10 years, and possibly 12, as indicated by a graffito of Butehamun in the hills of Western Thebes. This would make it approximately 1081-1069 BC.

Butehamun presided over the closure of the Valley and the workers’ village of Deir el-Medina, and the move from building new tombs to the preserving and moving (some would say plundering) of the mummies left behind, marking the transition from the New Kingdom to the Third Intermediate Period, as Egypt splintered into what were essentially two realms.

Did the man who led the official project to plunder the tombs of the Valley of the Kings show remorse or pride for his actions in later life? Butehamun, as chief scribe of Deir el-Medina at the end of the New Kingdom, was placed in charge of secretly reburying royal mummies to protect them from tomb robbers. Or…he led a campaign to plunder the tombs and their mummies of everything valuable on behalf of the High Priests of Amen. Or both.

Some of the sources seem to indicate that Butehamun experienced some kind of religious crisis, which may have been brought on by feelings of guilt over his treatment of the royal mummies, two of whom were worshipped as gods in Deir el-Medina.