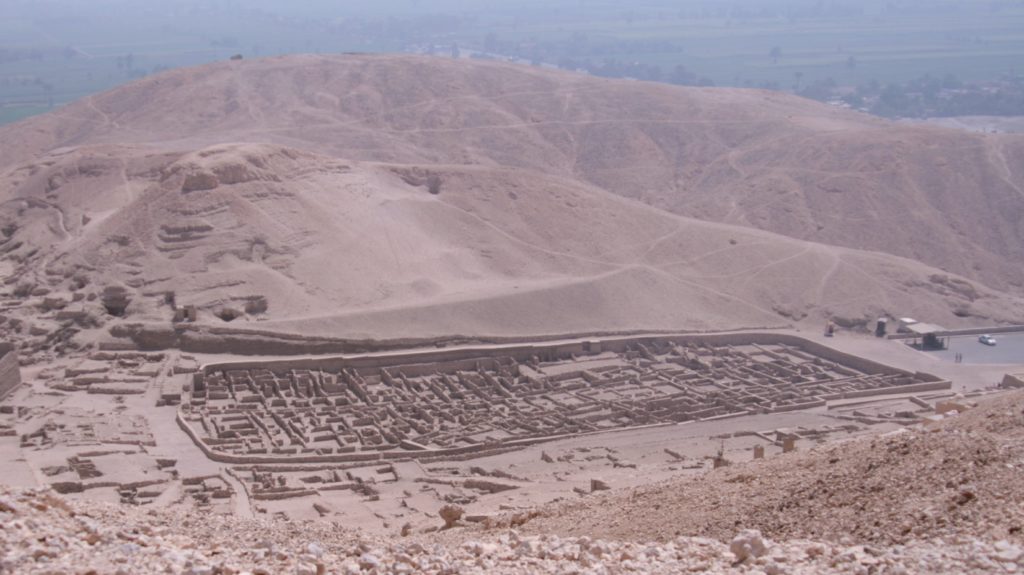 The site we call Deir el-Medina takes its name from a Coptic monastery built in the area after the arrival of Christianity. During the Egyptian New Kingdom it was called ‘Set M3ˤt’, ‘The Place of Truth’, and was home to the artisans who worked to build the royal tombs in the nearby Valley of the Kings, and their families. It was legendarily established by King Amenhotep I, who was later worshipped in the village as a deity, although it seems more likely the actual founder was his successor Thutmose I.

On a cliffside overlooking the village was a temple dedicated to Amenhotep and his mother Queen Ahmose-Nefertari. The original village seems to have been abandoned under Akhenaten, when the royal tombs were built near his new capital of Amarna, farther north. But with the end of the Amarna period and the return of the kings to Thebes, the village was reestablished, apparently under Horemheb.

One way Deir el-Medina was unusual was that so many of the inhabitants appear to have been literate.

Most of the LRL are letters to or from Butehamun or his father Dhutmose. They seem to date from year 12 of Ramses XI to year 12 of the ”Wḥm-Mswt”. Deir el-Medina was the home of the families of up to 120 craftsmen, led by foremen and scribes, while they dug and decorated the tombs of Egypt’s royalty, hidden in the nearby valleys. The task of the village continued for many generations, until the depredations of Libyan attackers, and the cessation of the construction of new royal tombs in the Valley when the 21st Dynasty established its capital at Tanis in the north, undermined the need for its existence.

The number of workmen in the village, around 29 during the reign of Ramses X, was down to16 by year 8 of Ramses XI. But it increased again during the subsequent period of ‘rebirth’ or  ‘renaissance’ called the Wḥm-Mswt.